Boundaries and limits exist to be overcome

The wind is unpredictable and, as such, it has been leading Tania Tsiridou down unpredictable paths. Indeed, her dealings with the wind have its unreachable, unattainable nature as their crux: “It is this unpredictable, chaotic and invisible dimension that constitutes the mystery, the starting point. The word ‘unpredictable’ is key; the wind is the epitome of the unpredictable. It comes and goes, just like a spirit that sometimes blows furious and turns everything on its head, and others comes in the form of a caress, awakening nostalgia. It always arrives from where you least expect it.” Research shows that in almost every ancient civilization, in every tribe and all across the world, there are deities, myths, temples and spirits devoted to the wind. Science may describe it fairly accurately, but it leaves major gaps in our experience of the wind. “There is this humility I am referring to; the humility I experience because I cannot understand it completely and I cannot grasp it.”

She often tells herself, “Wow, I have so much more to learn, still!” Studying for her first degree in sociology, she discovered how the norms that govern the dynamics of our coexistence are often mere contracts to guarantee society’s survival. They are neither godsends nor are they irrevocable and final; they are artificial and often vary across time and space. For instance, consider what we perceive as correct and incorrect, acceptable or disruptive. “Sociology helped me to understand that it is all a construct. How we understand social reality is a construct. This realization is responsible for an openness and receptiveness that affects how I view life and of course art, ‘authority’ or success. I aim to move within social reality as freely as possible, keeping my judgment and my integrity autonomous – which should, of course, mature with age, becoming more insightful.”

As a student, she spent a lot of time practicing photography and digital video, influenced primarily by friends who lived abroad – some artists and others, immigrants. “I’ve always had friends in different places and from different backgrounds. Many of them had no stature or money. Some were even illegal immigrants, so they were persecuted and abandoned. They were my source of inspiration.”

Journeys are an important part of her own life too. She was born in Germany, grew up in Thessaloniki, returned to Germany for her studies, and traveled a lot. “Borders and limits exist to be overcome,” she pronounces. “If you are scared, feel free to just stay home.” However, she acknowledges how admirable she finds those who are free spirits despite not having traveled. And then, there is the opposite. She fails to understand the people who might have opened themselves up to traveling but have “understood nothing,” as she explains. “It takes a certain… talent to have experienced and seen so much and still live in fear and in bias.”

In the past few years, she has pointed her research and experiments towards the links between art, technology and science, as well as what connects new media and art. In her artwork – for instance, in Unpredictable Wind Trajectories, 2018, a kinetic installation powered by a live media feed with which she took part in the 7th Thessaloniki Biennale of Contemporary Art – she incorporates a dynamic relationship between nature and technology. Seen through Tania’s work, the internet constitutes a structure of dominance and control over the powers of nature, as well as a tool to augment human sensory organs. “Our challenge is to position the internet towards our real, meaningful spiritual and psychological needs; to make it into a tool of exaltation, transforming it into a never-ending game of meaningful information exchange. Of course, there are issues of commercialism, of dominance and of authority, circumstances we might feel are bigger than us. But the internet is also us, so we are also responsible for its condition.”

She teaches in the Department of Audio & Visual Arts of the Ionian University, Corfu, from where she has witnessed society and education’s misconceptions of art. “Art continues to be thought of by the State as unimportant compared to other fields. It is seen as a game or as a luxury – and the time, resources and infrastructure they dedicate to it correspond to this. As long as this misconception perseveres, which I would call a huge, tragic failure of our societies, the place of art in Greek schools will continue to be limited. Consistent to that, many students lack the passion I would have liked to see because they are victims of this misconception. There are, however, a few shining stars among them,” she notes, and expresses how keen and often anxious she is to successfully share with her students her passion for technology in art.

Who is who
Tania Tsiridou earned her first degree at the Department of Sociology at the Universitaet zu Koeln in Germany in 2001, and her postgraduate degree in the digital arts from the School of the Fine Arts, Athens. In 2019, she received her Doctorate from the Department of Audio & Visual Arts of the Ionian University of Greece, where she explored how digital technologies influence the way art explores invisible and unpredictable natural phenomena. She has taken part in multimedia productions and in group art exhibitions in Greece and abroad. Her more recent research embraces internet art, interaction design and the use of data in the development of artwork. She has been teaching at the Department of Audio & Visual Arts of the Ionian University since 2008. She is currently collaborating with artist Marianne Strapatsakis on an interactive multimedia installation, hoping to present it in September of 2021 in an Athens exhibition curated by Kostas Prapoglou. 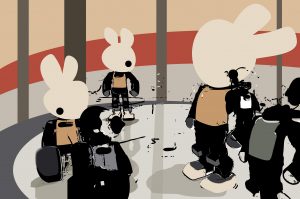