Starting from Thessaloniki, he illuminates Greece’s coordinates  across the international map.

Being selected by the London Symphony Orchestra as one of the 20 most talented young conductors of Europe is no small feat. Yes, this recognition was bestowed upon Thessaloniki-bred Konstantinos Diminakis when he had just completed his musical studies. Class valedictorian at the Melodia Conservatory of Kalamaria, Diminakis continued his studies at the University of Macedonia and then moved to Vienna in order to study orchestral conducting.

«This gave me a tremendous momentum and served as a significant confirmation of what was to follow,» Diminakis recalls, now a permanent resident of the Austrian capital and one of the fastest-rising conductors of his generation.

He’s presently the artistic director of Vienna’s  Orpheus Chamber Orchestra (Orpheus Kammerorchester Wien), conductor and assistant conductor of Klosterneuburg Opera in Austria and conductor of the Opera de Baugé in France, constantly jetting around the world to lead as guest conductor some of the most famous ensembles in Europe, Asia and the United States.

Yet, Greece is not among his most frequented performing destinations and time spent here is mostly for summer vacations.  «In Greece, unfortunately, the classical music genre is quite confined and disproportionately small when compared to the number of talented Greek musicians. But, for me, Greece is what I carry inside me and I feel proud that I can carry my country with me wherever I go.»

An indication of his love for his country is an initiative Diminakis undertook in 2011 when he created his own chamber orchestra comprising Greek musicians living in the wider region of Vienna.  The ensemble currently employs thirty musicians of various nationalities and has performed in important halls throughout Europe, with an extensive repertoire that also includes classical Greek music. 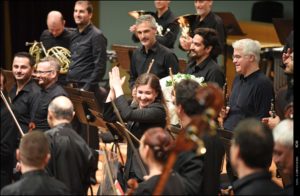