With a smooth yet vibrant narrative, Barbas’ lens triggers a spontaneous feeling of empathy, without ever resorting to emotional blackmail

Life and death, through the glass

Regardless of the topic, from iconic figures in the history of Greek science (Georgios Ioakeimoglou) all the way to artists whose legacy will never fade out (K.P. Cavafy), Christos Barbas always finds the way to unfold the stories of people that form human History. With a smooth yet vibrant narrative, Barbas’ lens triggers a spontaneous feeling of empathy, without ever resorting to emotional blackmail. The director from Kozani takes part in the International Competition of the 23rd Thessaloniki Documentary Festival with his film, Through the Window Glass, Three Acts.

The documentary takes us back to the early days of the lockdown, when the staff of a nursing home, in the north suburbs of Athens, was submitted to voluntary confinement inside the premises, as the unit was sealed off as a precaution measure against the pandemic. For a period of two months, workers and residents became one, struggling to cope with the immeasurable psychological repercussions triggered by a truly unprecedented situation. Christos Barbas’ crew was granted access inside the secluded nursing home, recording with prudence, discretion and tenderness the daily lives of these people. Barbas’ movie almost inevitably fuels a series of unpleasant thoughts over the cruel way modern societies deal with the dread of old age and physical decay.

The worshiping of youth is a timeless phenomenon, as no-one seems willing to let go of its vitality and glow. The idea of growing old is appalling to us and as soon as the first signs appear, we resort to unthinkable actions, sliding into streams of anti-ageing crèmes, eager to fall for any type of fable that promises to preserve our youthfulness. We grow old, but we remain totally unprepared and utterly terrified over the prospect of old age. This way, while being young we subconsciously cast older people out of society, as they represent a future remembrance of ourselves in 20 or 30 years,” mentions the Greek filmmaker.

One of the most important virtues one can trace in Barbas’ documentary and overall approach as film director is the moderate handling of the primary material, in a way that transcends documentation, reaching the levels of an unrevealed and unspoken truth that surpasses events, testimonies and images. He goes on to add: “I wanted to achieve a narrative that balances between the staff and the residents. I tried to remain detached from anything that described everyday life within the unit. In the editing stage, I attempted to emit the prevailing feeling. There’s something mystical inside a nursing home. For most old people residing there, it’s the last home of their lives. You are struck by this realization, the place urges you to behave with respect and reverence.”

Through the Window Glass, Three Acts affirms the impression that Greek documentary is evolving and flourishing, functioning as the spearhead of the national cinema production. Does he agree with this thought? “The genre of documentary is gaining popularity throughout the world. The pandemic heightened the directors’ reflexes. Documentary is real life’s cinema and found itself equipped with screenplays that exceeded every imagination. And artistic creation, regardless of the stimuli and the pretext, will always be the best way to accept the fragility of our own existence. Given that our field has demonstrated creativity, the least we can do is help its people the best way we can. When a flower grows in Greece, let us take the time and effort to water it regularly,” he concluded. 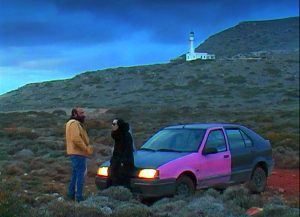