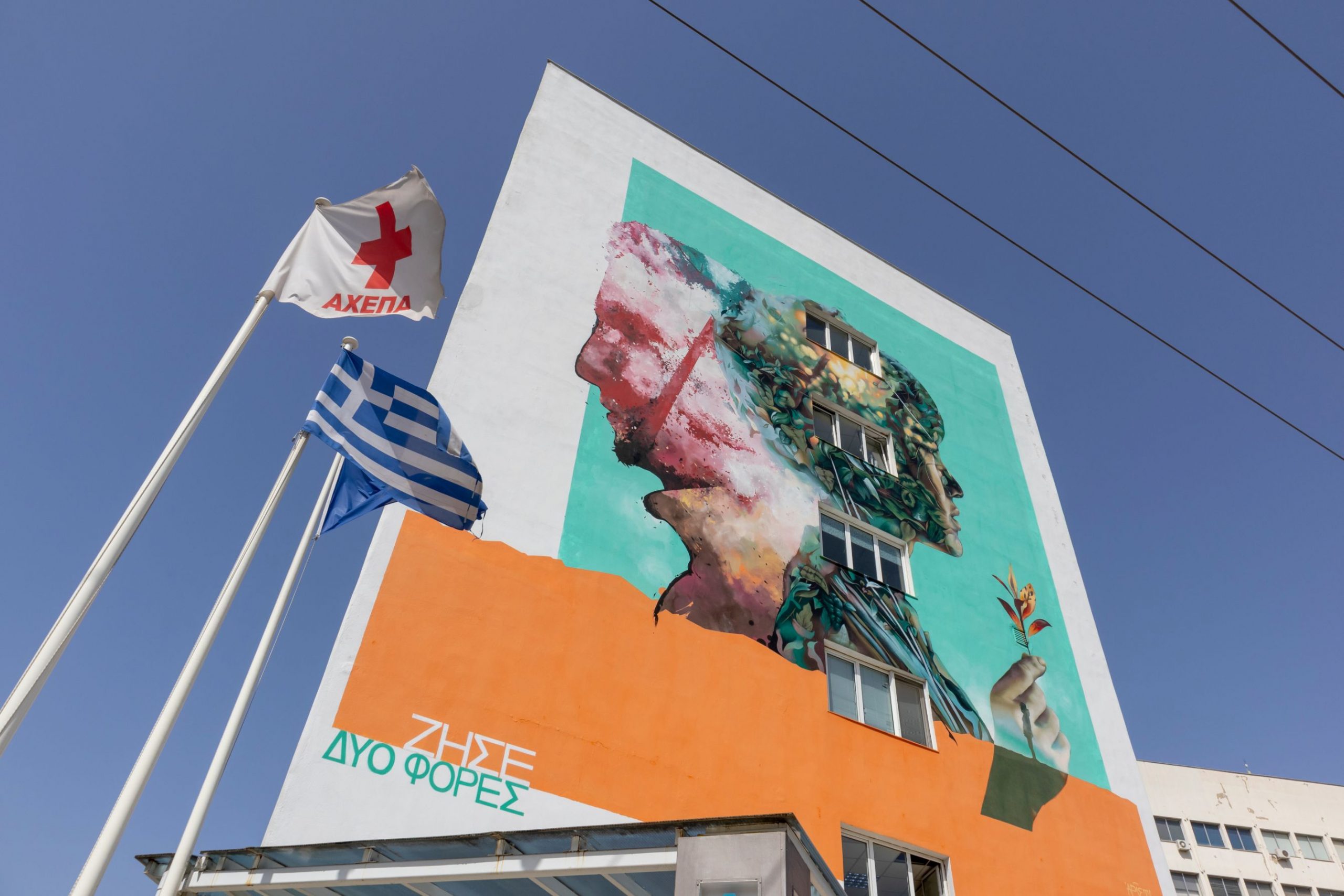 A vision with greener public space, better architectural standards and more art of all sorts and kinds

His artistic nom de plume, Apset, is an anagram of his name (Ste-Set), “with conceptual elements” of his own character, as he points out. He took on graffiti in 1998, along with his homies at the center of Thessaloniki. In the beginning, it was all about street culture. Later on, he set out to externalize his ideas and reach out to other people. “In the course of time, I became more theme-oriented, gradually putting sensibility and logic into my work.” Adopting a more professional approach was no easy task, nor it became an end in itself; it was something that grew on him along the way.

The way he sees things, his canvas is no other than the public space of his everyday life. “The palette consists of all the things that pile up inside of us, the stimuli offered by the place we live in, that we absorb and rechannel back to our surroundings, in the form of images.” He envisages a greener public space, with better architectural standards and more art of all sorts and kinds.

For many years his only concern was to express himself, but as time went by he added several aspects to his work, such as the preparatory study of the location, the research on the neighborhood, as well as on the social and cultural background: key factors that have ended up playing an important role as to the selection of both the design and the “palette”. However, there’s always a sense of purpose to fulfill. “Sometimes, the goal is to be provocative through the theme or the color you choose. Other times, you just aim to strengthen the structures of a public space that could “complete” a scenery.”

When it comes to public space interventions, the hardest obstacle to overcome is no other than bureaucracy. “Quite often, our projects end up stale or even cancelled,” he explains. Public space interventions are faced with practical challenges, such as granting of permission to paint a surface or shut down a street; there’s also the issue of the pedestrians’ passage and safety. These things require a thorough prep-work.” This process, according to Apset, is pretty much the same abroad, except for a crucial difference: “In other countries, public services are more familiarized with the issue, enabling and speeding up the whole process.” A street artist, as any other freelance professional, enjoys a certain freedom, along with the setback of uncertainty. “Based on my experience from other jobs I had, waking up to do something that pleases you kind of tones down the concept of “work”. I am really happy to feel and live that way.”

Seeking to evolve as an artist, Apset went on to study at AUTh’s Faculty of Fine Arts. “My engagement with different forms of art, and every certificate or degree I obtained in these fields, came out of the need to evolve as an artist and not as a means to “change” my art. Of course, along the way it became a two-sided process. My real goal was to broaden my horizons and raise a different series of questions. Sometimes, the journey is far more interesting than the destination of the final outcome.”

He is based in Thessaloniki, but if he had to make a change, he would opt for an “atelier” near the see and the sun, “in Southern Europe or in the West Coast of the USA, anywhere from Oakland to Florida,” as he points out. In Thessaloniki, he dreams of transforming the city’s street flyovers. “If I had the chance to meet in person with every head of every administrational body, this would be my request. I would ask every municipality to back up its artists and allow them to transform these urban constructions into works of art. This project would be a product of collaboration between the graffiti writers and the street artists of every region and neighborhood.”

Like so many artists before him, he finds it hard to single out one of his works. However, he can’t help but to admit that the collective mural painting at AHEPA Hospital holds a special place in his heart, due to the uniqueness of the occasion and the warm feedback and vibes by the kidney patients, who “commissioned” this work of art. Over the last years, positive reactions towards public space interventions have become and more frequent. “The most sincere reactions come from young people and the elderly. They are utterly spontaneous, as people instinctively share their unfiltered thoughts”.

In the past, though, things used to be different and most reactions and comments were purely negative. “People used to call the police, even when permission had been granted. We were pinpointed as “bums” who “stain” the walls. Over time, there was a change of attitude. I firmly believe that my generation carried out this transition, by exceeding the boundaries of street culture and reaching out to society as a whole. This way, we communicated our message to more people and to a wider audience.” Theme-related festivals also played a key role in the acceptance of art interventions within the urban web. “As a host, I encourage the audience to take a careful glance at the process, to see the faces behind the works, to engage in a conversation with them.”

Apset is gearing up for a collective exhibition in Paris, as well as for another project that will be carried out in the French capital. At the same, some large-scale mural paintings are on their way, scheduled to be completed by the end of the year in Thessaloniki, Athens and Crete.

Who Is Who
He was born in Thessaloniki, in 1984.
He studied graphic design at the Public Institute of Vocational Training at the Municipality of Triandria, majoring in “graphic design of press and online media” (2003-2005). Upon completing his studies, he took part in the “Leonardo-da-Vinci II” internship program held by Futurum, in Poland (Warsaw-Cracow).

He took part in Pelekas Art Festivals (P.A.F. graffiti & music festival) in Corfu, from 2005 to 2008, and SAF (Street Art Festival Thessaloniki) from 2014 to 2017. In addition, he has participated in many national and international events, showcasing many of his works.

From 2006 to 2011, he collaborated with Pacific Décor in the creation of thematic parks in some of the largest municipalities of Greece (Athens, Maroussi, Thessaloniki, Heraclion etc.)

He is an honors graduate from the School of Visual & Applied Arts of AUTh’s Faculty of Fine Arts, as well as a member of the Chamber of Fine Arts of Greece (EETE). 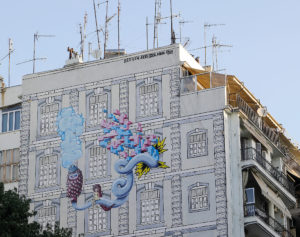